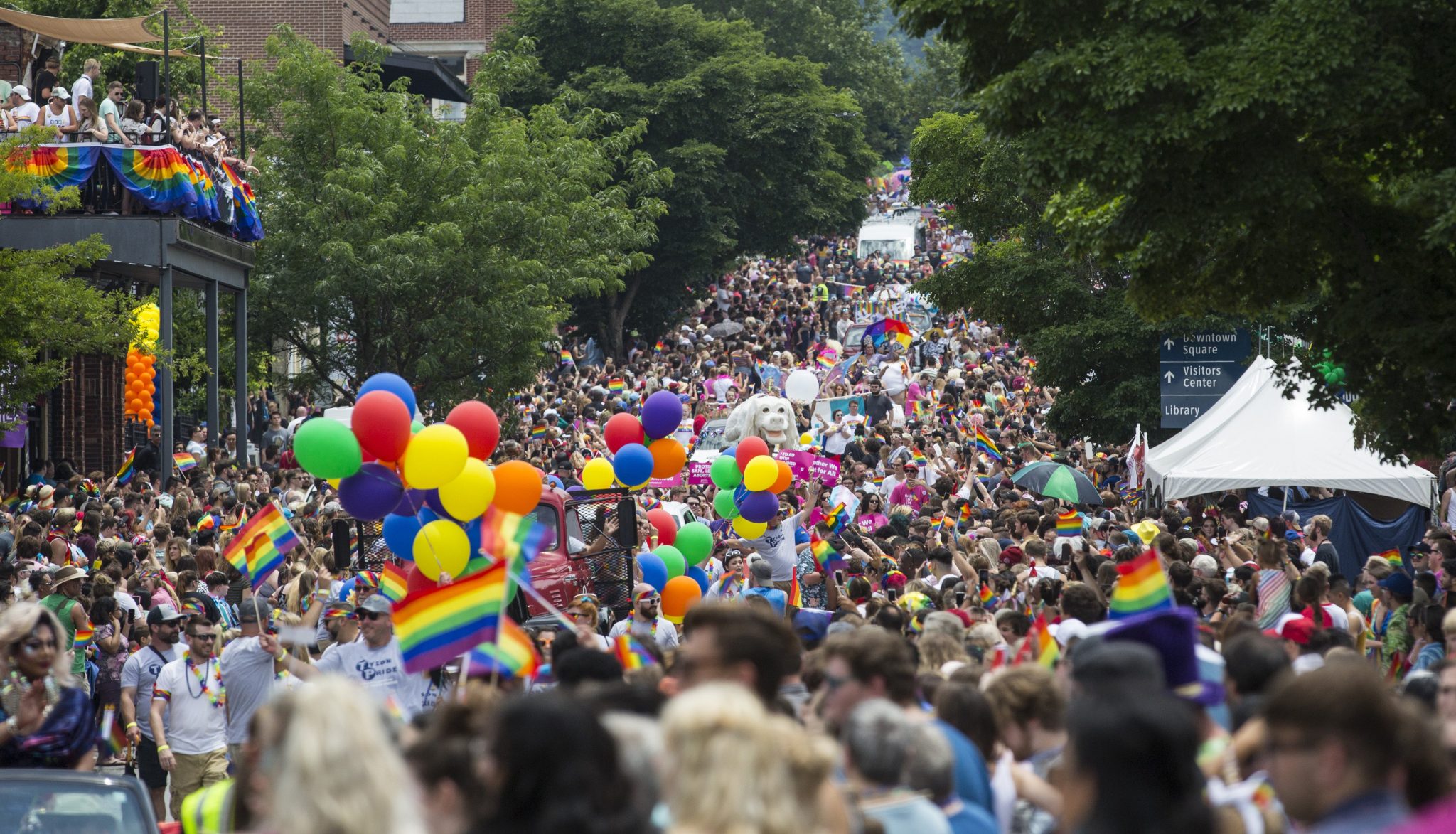 Northwest Arkansas Pride has added color and splash to the Ozarks since 2004. With now over 20,000 participants and spectators, this is Arkansas' largest LGBTQ pride celebration!

NWA Pride was formed in 2007 to officially operate the Parade, while the NWA Center for Equality organized associated Pride events throughout June. In 2015, the NWA Pride organization and the NWA Center for Equality merged to create Northwest Arkansas Equality, and the ﬁrst paid staff were hired to assist in operating the Parade and Festival, which had grown in scope and attendance over the years. Throughout 2016 and 2017, NWA Equality continued to grow, and our expanded efforts brought our first celebrity, Trixie Mattel, to NWA Pride. Over a decade of countless hours of contributions from passionate staff and volunteers, NWA Equality grew Pride from 200 participants and spectators in 2007 into an annual tradition and Northwest Arkansas' largest Parade.

With new leadership and an expanded NWA Pride committee, 2018 brought a reimagining of NWA Pride's operations and events. These changes brought the Pride Festival to Dickson Street, with multiple stages and a dedicated family zone. Further expansion efforts in 2019 grew the Parade to be Fayetteville's largest, at over 2,500 participants and 20,000 attendees. We featured celebrity comedian Fortune Feimster, movie star and TV personality drag queen Shangela, and internationally renowned DJ Joe Ross.

COVID Couldn't Cancel Us: Like most organizations in 2020, COVID-19 disrupted our planned events, but in less than five weeks, 25 volunteers donated over 600 working hours of writing, acting, and editing, and we successfully transformed our live events into a virtual environment. The live-streamed events included a virtual parade, consisting of over 60 sponsor, community, and celebrity video submissions; an online happy hour and live concert, produced by Maxine's Tap Room; a digital drag show, produced by C4 Nightclub; a virtual version of Glitterville with two celebrity DJs; and the highly praised broadcast of Equality Street, a youth variety show. This production brought together 23,000 people on our broadcasting streams, and many of these events are available on our YouTube channel. Our videos were featured on the 24-hour Global Pride broadcast, where over 57 million people watched submissions from organizations and celebrities from all over the world. We represented Arkansas as one of the five U.S. Pride organizations in the Central America timeslot. Due to generous support from our sponsors and the community, the revenue from these virtual events prevented NWA Equality from a budget shortfall. These funds ensured we could continue our HIV testing program and other essential services during the pandemic.

Last Year: As vaccination rates increased and COVID-19 concerns lessened in the spring, and Arkansas' legislature attacked the state's trans residents and families, we found our community needed to gather and protest. We forged ahead with limited events. June 2021 marked the 40th anniversary of the AIDS epidemic, and AIDS activist Ruth Coker Burks served as our Parade's grand marshal, and her story was woven into events throughout June. Trans activist, and the first trans person elected to office in Arkansas, Evelyn Rios Stafford, served as Parade honoree. She led Arkansas' first Trans March, a Fayetteville-planned protest for the rights of transgender and gender non-conforming Arkansans. New York comedian Matteo Lane also entertained audiences during NWA Pride Weekend.

This Year: The 18th annual NWA Pride Parade and Festival will return to full capacity! 2022 celebrates the 50th anniversary of the Miss Gay Arkansas and Miss Gay America pageants and is heavily rooted in Arkansas' Queer history. As Miss Gay Arkansas 1972, Miss Gay America 1973, and owner of Arkansas' and one of the south's largest and longest-running LGBTQ nightclubs, Norman Jones, and his stage personality Norma Kristie, have touched the lives of thousands of LGBTQ Arkansans and people across the country; and he will serve as this year's Grand Marshal. Lifting the visibility and advocating for our trans community, NWA Trans March will return as part of the NWA Pride Weekend. The highly anticipated return of Glitterville has already made a splash, selling out all premium tickets within 24-hours upon the announcement that Rupaul's Drag Race royalty Symone and Maddy Morphosis, and New York DJ Joe Pacheco are headlining this event.

With over 25,000 participants, Northwest Arkansas Pride Weekend is the state's largest LGBTQ celebration, and we hope you will help us continue to celebrate one of the most colorful displays of diversity and inclusion in Arkansas! 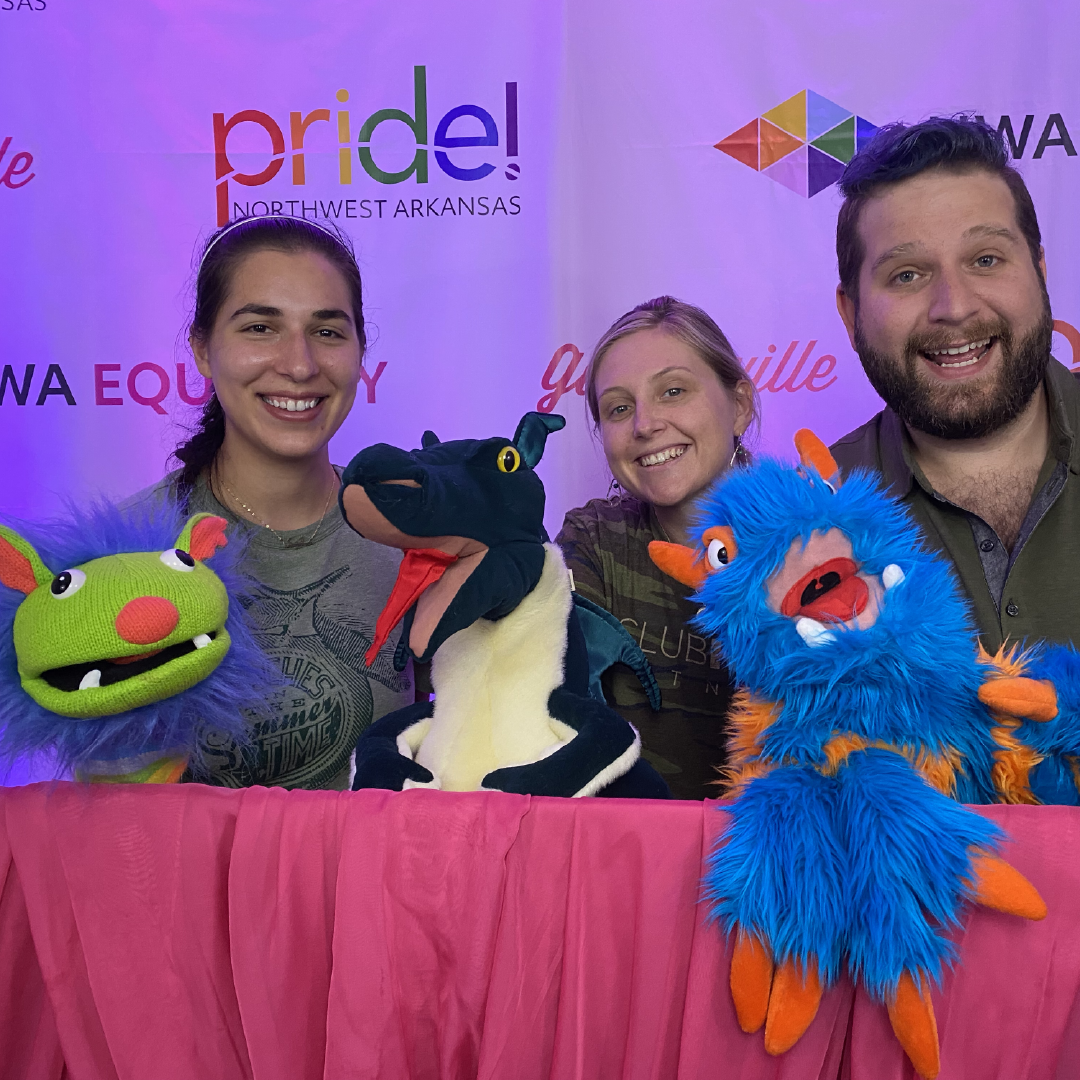 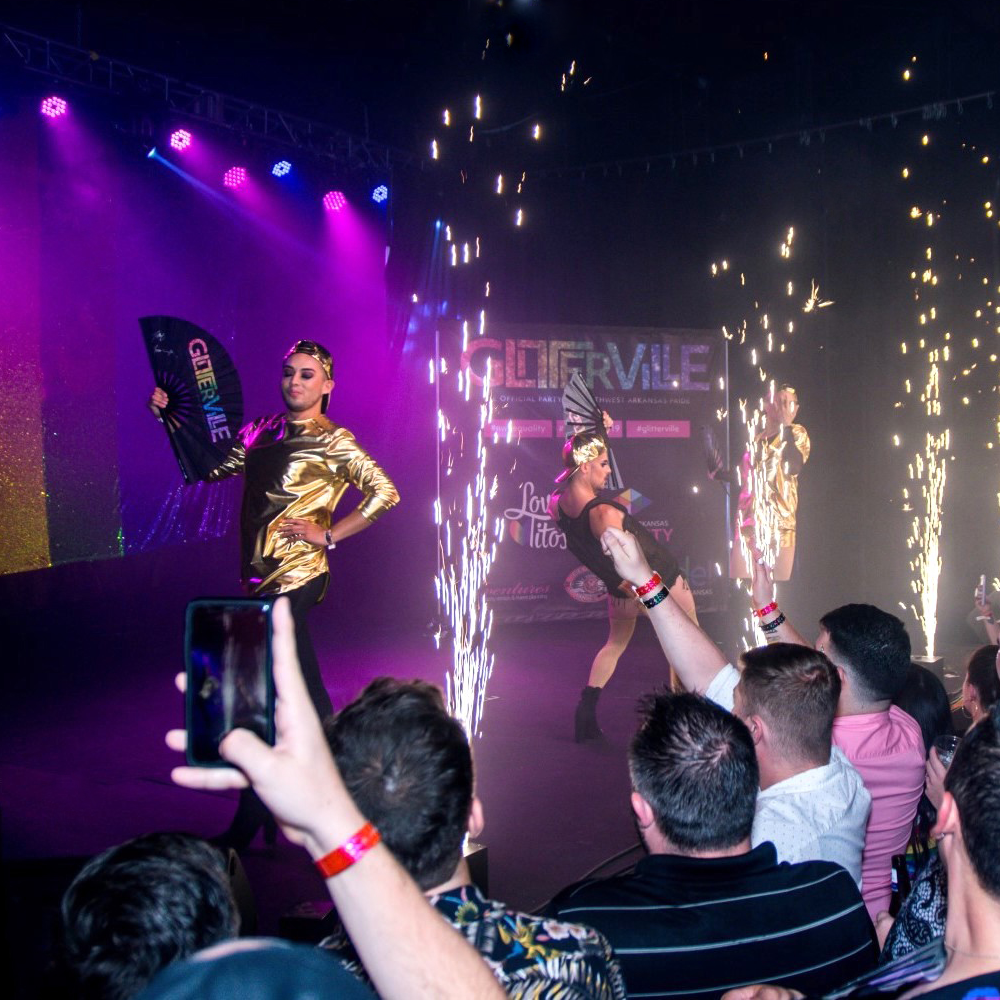 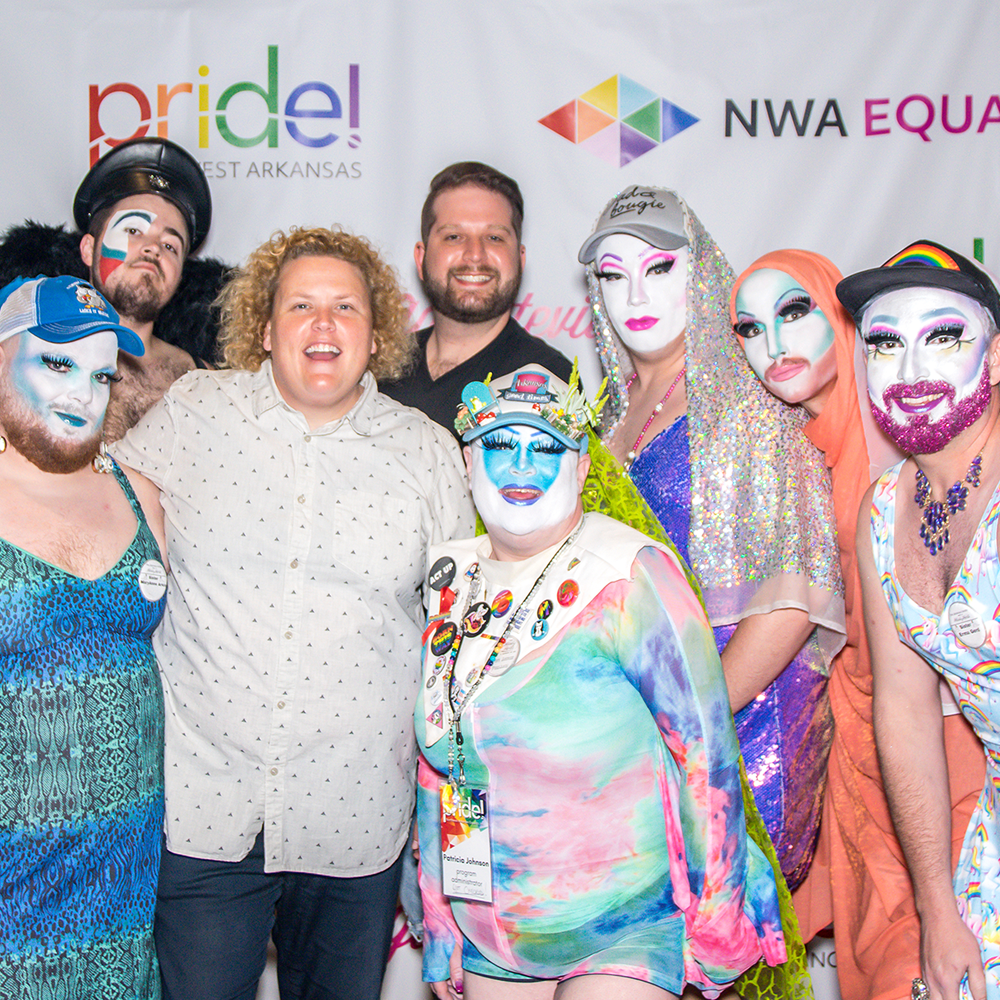 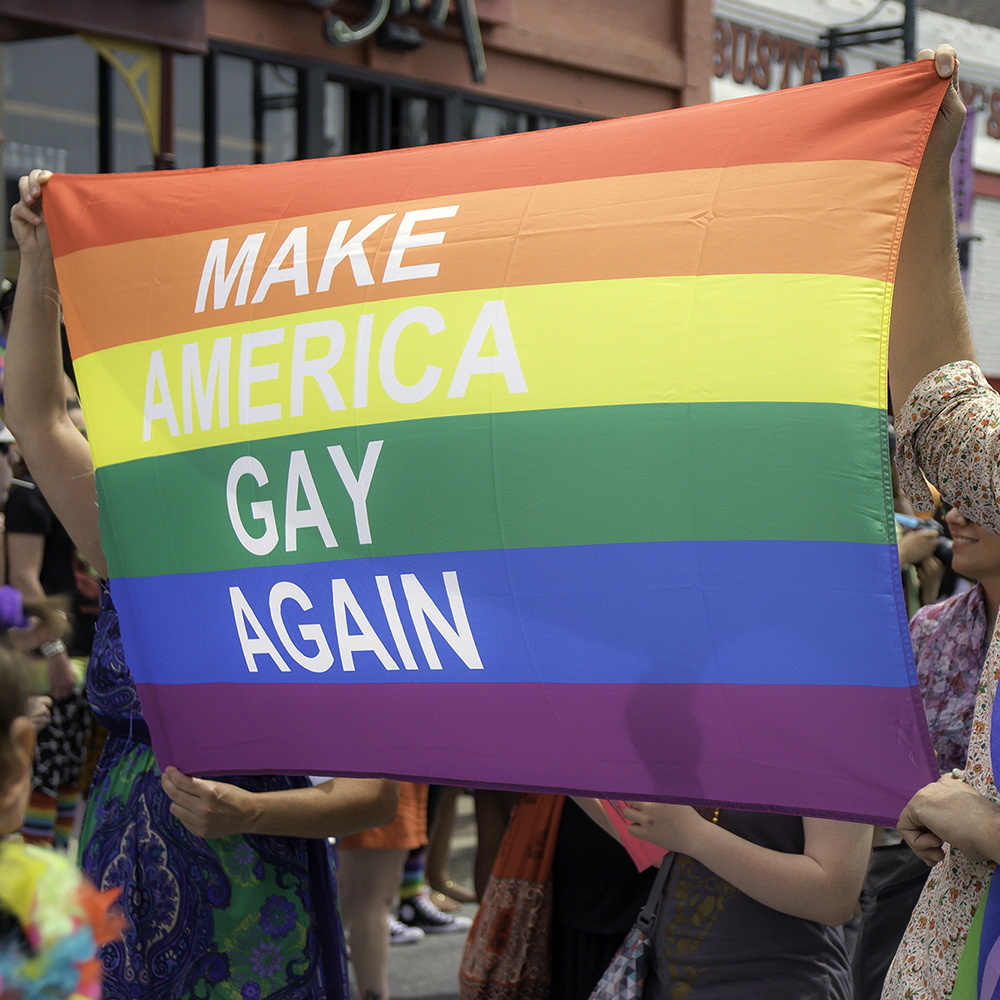 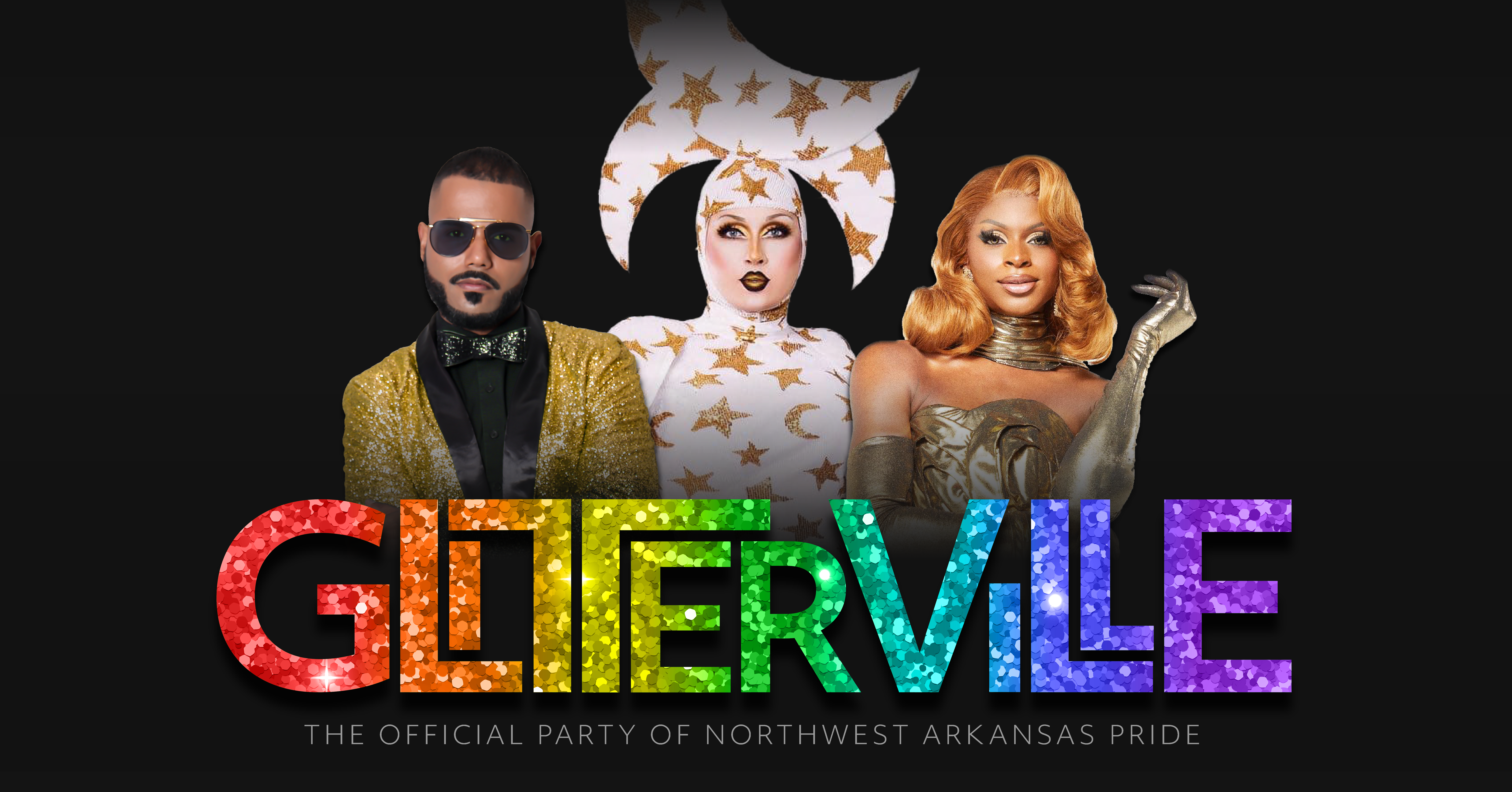 According to recent figures, 90% of LGBTQ individuals report business participation in LGBTQ events and charities significantly influence their purchasing decisions; 1 out of 4 LGBTQ adults switched products or service providers because they found a competing company that supports LGBTQ causes.

Through a sponsorship to NWA Pride, you have the opportunity to build strong visibility and LGBTQ engagement for your brand and help infuse a sense of belonging to the Queer community. Visibility spans numerous organizations, restaurants, bars, and merchants throughout the Northwest Arkansas region, plus 25,000 event attendees who will recognize your contribution and commitment to the LGBTQ community. Our market reach includes advertising throughout Arkansas, Tulsa, Oklahoma City, Joplin, Springfield, Kansas City, and Dallas. Our larger events have attracted attendees from California, Georgia, Illinois, and Tennessee. Northwest Arkansas Equality holds a 135,000+ Facebook reach, over 40,000 annual website impressions, and 200,000 Instagram views for NWA Pride. Our 2020 and 2021 virtual events carried over 20,000 viewers during peak streaming times.

Please help us support and strengthen NWA Pride weekend, LGBTQ visibility, and essential community services through tax-deductible donations, all the while building loyalty and rapport with an increasingly important consumer segment.

Register For The Parade & Festival Here

We use cookies on our website to give you the most relevant experience by remembering your preferences and repeat visits. By clicking “Accept All”, you consent to the use of ALL the cookies. However, you may visit "Cookie Settings" to provide a controlled consent.
Cookie SettingsAccept All
Manage consent

This website uses cookies to improve your experience while you navigate through the website. Out of these, the cookies that are categorized as necessary are stored on your browser as they are essential for the working of basic functionalities of the website. We also use third-party cookies that help us analyze and understand how you use this website. These cookies will be stored in your browser only with your consent. You also have the option to opt-out of these cookies. But opting out of some of these cookies may affect your browsing experience.
Necessary Always Enabled
Necessary cookies are absolutely essential for the website to function properly. These cookies ensure basic functionalities and security features of the website, anonymously.
Functional
Functional cookies help to perform certain functionalities like sharing the content of the website on social media platforms, collect feedbacks, and other third-party features.
Performance
Performance cookies are used to understand and analyze the key performance indexes of the website which helps in delivering a better user experience for the visitors.
Analytics
Analytical cookies are used to understand how visitors interact with the website. These cookies help provide information on metrics the number of visitors, bounce rate, traffic source, etc.
Advertisement
Advertisement cookies are used to provide visitors with relevant ads and marketing campaigns. These cookies track visitors across websites and collect information to provide customized ads.
Others
Other uncategorized cookies are those that are being analyzed and have not been classified into a category as yet.
SAVE & ACCEPT