NWA Equality is excited to partner in this socially distant event linking interactive blocks of the National AIDS Memorial Quilt for our community to view. Included in the selection are panels honoring Arkansans who fell victim to the AIDS virus. 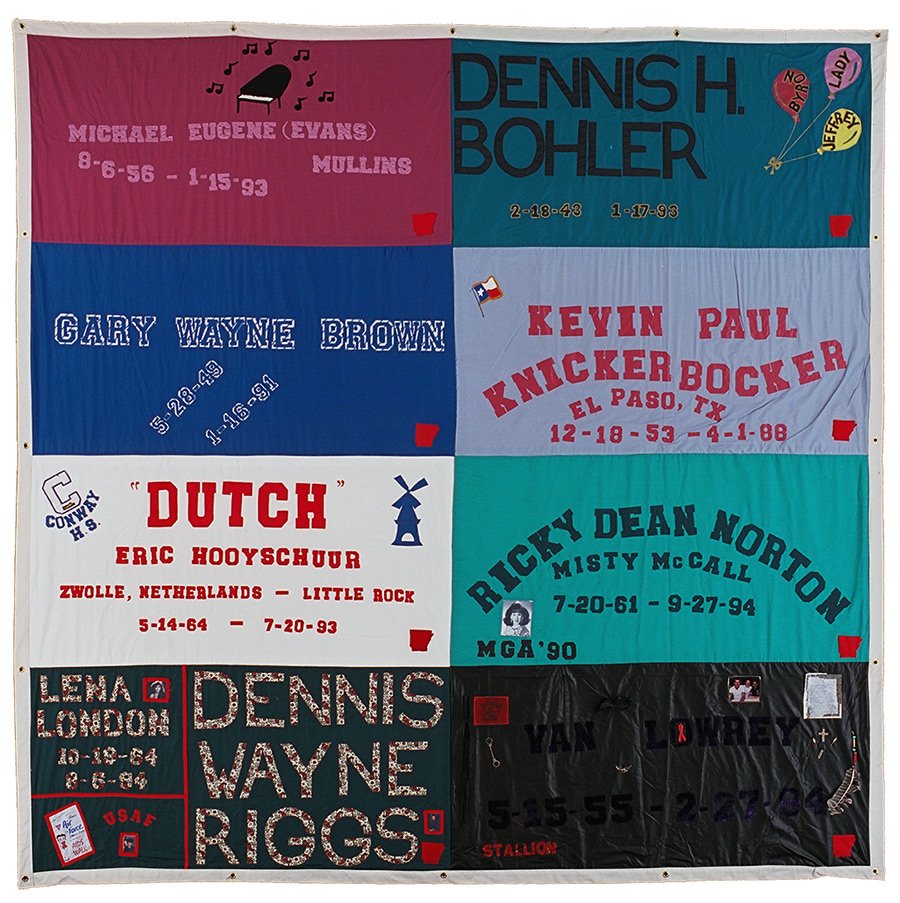 About the Virtual AIDS Quilt

In 2020, The National AIDS Memorial digitized all 48,000 panels of the Quilt. They worked together with NWA Equality and other Quilt partners in every State to create this exhibition, which includes digital images from thousands of hand-sewn Quilt panels, each visually telling the story of loved ones lost to AIDS. The links to the panels are below.

Northwest Arkansas Equality's AIDS Memorial Quilt selections include Arkansans and historical figures significant to the AIDS movement. If you know more information about these Arkansans or others not shown as part of this display, please let us know.

The AIDS Memorial Quilt was conceived in November of 1985 by long-time San Francisco gay rights activist Cleve Jones. By 1985, over 1,000 San Franciscans has been lost to AIDS.

On October 11, 1987, the Quilt was displayed for the first time on the National Mall in Washington, D.C., during the National March on Washington for Lesbian and Gay Rights. It covered a space larger than a football field and included 1,920 panels. The overwhelming response to the Quilt’s inaugural display led to a national tour in 1988. More than 9,000 volunteers across the country helped the seven-person traveling crew move and display the Quilt. Local panels were added in each city, tripling the Quilt’s size to more than 6,000 panels by the end of the tour. With the World Health Organization's help, Quilt organizers traveled to eight countries to mark the first World AIDS Day on December 1, 1988, with simultaneous displays broadcast from six continents.

In October 1989, the now 12,000-panel Quilt was again displayed on the Ellipse in Washington, D.C.  HBO released their documentary film on the Quilt, Common Threads: Stories from the Quilt, which brought the Quilt’s message to millions of movie-goers. The film won the Academy Award for Best Documentary of 1989.

By 1992, the AIDS Memorial Quilt included panels from every state and 28 countries. In October 1992, the entire Quilt returned to the National Mall in Washington, D.C.  In January 1993, the NAMES Project was invited to march in President Clinton’s inaugural parade where over 200 volunteers carried Quilt panels down Pennsylvania Avenue. The last display of the entire AIDS Memorial Quilt was in October of 1996 when the Quilt covered the entire National Mall in Washington, D.C., with an estimated 1.2 million people coming to viewing.  The Clintons and Gores attended the display, marking the first visit by a sitting United States president.

Today, the AIDS Memorial Quilt is an epic 54-ton tapestry that includes more than 48,000 panels dedicated to more than 100,000 individuals. The Quilt's tours have raised millions of dollars for HIV/AIDS research, and the Quilt is viewed through over 1,000 displays worldwide every year. It is the premiere symbol of the AIDS pandemic, a living memorial to a generation lost to AIDS, and an important HIV prevention education tool. With hundreds of thousands of people contributing their talents to making the memorial panels, and tens of thousands of volunteers to help display it, the Quilt is considered the largest community arts project in history.

Mr. McEnany was a landscape architect and gardener from Fayetteville. He designed the city's Downtown Square gardens that thousands of people continue to enjoy each year. Don McEnany is memorialized with a plaque and bench in a lush, shaded area at the northeast corner of the Old Post Office.

Quilt Block 1220, in the upper left corner, contains the first names of 32 Arkansans who were victims of the AIDS virus. Little is known about this memorial. If you have more information about the individuals, please let us know.

Guerro was a fashion and evening gown designer from Fort Smith. He also owned a luxury car service. You'll notice the beaded Rolls Royce on his memorial, combining both his love for elegant clothing and cars.

Michael Androlewicz, more commonly known by stage name Michael Andrews, was from Missouri. He perfected the illusion of impersonating Ann Margaret. In 1977, he won the title of Miss Gay America, and he was an actor who performed female characters, in drag, in films such as Avenging Angel (1985), Malibu Express (1985), and Talking Walls (1987). He passed away from the AIDS virus in 1989.

Newman Braud went by the stage name Naomi Sims. Sims was a nationally known dancer from Texas and one of the nation's foremost female impersonators. He won the title of Miss Gay America in 1985. Naomi Sims passed away from complications from AIDS in 1992.

While neither Androlewicz nor Braud were resident Arkansans, however, Miss Gay America was headquartered in Arkansas until 2005. They frequently traveled to Arkansas for business purposes and quickly became part of the fabric of the natural states' queer community.

Ryan White was a teenager from Indiana who contracted HIV in 1984 after a medical procedure, and he was 12 years old. Although he was only given six months to live, he quickly recovered. In 1985, his mother petitioned his school to allow him to return. However, one-third of the school's parents, teachers, and students petitioned to prevent White from returning, and the school's administration subsequently denied him re-admittance. This sparked an administrative appeal process that lasted eight months, culminating in the State of Indiana requiring the school to allow White's return. Upon Ryan White's return to school, a group of families withdrew their children and established an alternative school. He and his family were shunned, harassed, and bullied. The school required him to eat with disposable utensils, use separate bathrooms, and waived his requirement to enroll in a gym class.

In 1986, the White family moved to another Indiana town where the faculty and students were more educated about HIV/AIDS. At this time, Ryan White quickly became a national spokesperson for the AIDS crisis, appearing in fundraising and educational campaigns. White participated in numerous public benefits for children with AIDS and regularly spoke to audiences on daytime talk shows about the virus.

Ryan White died in 1990 at the age of 18, one month before his High School graduation. His funeral was attended by 1,500 people, including First Lady Barbara Bush, Elton John, and Phil Donahue.

In August 1990, four months after his death, Congress enacted The Ryan White Comprehensive AIDS Resources Emergency Act, often known as the Ryan White CARE Act. The act is the United States' largest federally funded program for people living with HIV/AIDS and was extended during the Obama administration.

Rock Hudson was an American actor known for his all-American looks. He became an A-list celebrity in 1956 when he was cast in Giant, where he acted alongside Elizabeth Taylor and James Dean. Both he and James Dean received Oscar nominees for Best Actor. Although Rock Hudson was no out, his sexuality was a well-known Hollywood secret.

Hudson was diagnosed with AIDS on June 5, 1984. He flew to France searching for treatment and ways to delay the spread of the virus. Despite speculation, he kept his diagnosis hidden from the public until July 1985, when he revealed he had contracted the virus. On October 2, 1985, Hudson died in his sleep at the age of 59. Rock Hudson’s death put a household name and face to the AIDS virus, and helped fundraise millions of dollars for AIDS research and pushed policy forward. A few days after Hudson died, Congress set aside $221 million for AIDS research.